Mike Cano has quickly risen through the comedy ranks to become a favorite at clubs and colleges all across the country.  He has performed and opened for some of the biggest names in Comedy.  His comedic style and energy are off the charts.  Mike became a single father at the age of 16.  He uses his struggles, experiences, and triumphs in his jokes to make people laugh. Mike relates not just to young adults but to all ages as he jokes about juggling the comedian life, dating, and parenthood.  Mike performs at comedy clubs and colleges throughout the U.S.  You’ve also seen him on LAUGHS on FOX, MTV2, NBC Universal’s Mun2 TV and Latino 101.  He also produces his own monthly show in his home town of Ontario Ca at the Ontario Improv.
Mike Cano comes to us from Laughing to Success Entertainment.
Mel Austin performs comedy for corporations, military, fundraisers, senior homes, private parties, school assemblies and churches.  Mel does ongoing shows for Primerica, American Cancer Society, Veterans of Foreign Wars, VA Hospitals, SCAN Health Care and Ontario/ Chino Unified School Districts.  As the CEO of Laughing to Success Entertainment and Laughing 2 Success Academy, Mel has access to other comedians to create a full show for clients when requested.
Mel has been an actor and comedian for the last 18 years and has served in the U.S. Marine Corps.  He also performs at The Improv, Comedy Store, Laugh Factory and produces comedy events at major venues and local community gathering places.  Mel Austin is the host and creator of “Squeaky Clean Comedy” at the Ontario Improv Comedy Club (Ontario, CA).  He has several commercial, film and theatre credits.  His most recent nationwide commercials are with Terminix and National Geographic and AMP’D Mobile.
Mel Austin is a coach/trainer/teacher of acting and standup comedy for teenagers and adults.  Originally from Chicago, Illinois; He’s based in Southern California with his wife and children in the city of Alta Loma. 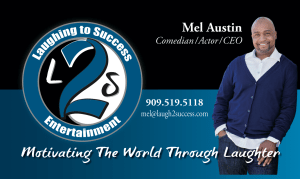